The polyculture allows to fight against pests and diseases, let’s see how and which associations to favor.

Defense mechanisms of polycultures against pests

Lower pest damage in polycultures may be due to the fact that they are less attractive to pests :

The pest does not find the crop it usually feeds on

This is because the associated crop alters the physical (microenvironment, light reflection pattern, etc.) or chemical (attraction scattering, odor masking, repulsion, etc.) conditions that normally indicate the presence of the crop to the pest, thus decreasing the probability of finding it. Let’s look at some examples.
The insect’s search for the host plant often involves olfactory mechanisms. Pest-attractive plants combined with non-attractive plants can be an important part of pest defense, due to the masking effect of crop odors by companion plants. For example:
– Carrot-onion.
– Carrot – alfalfa.
– Intercropping of tomato and cabbage results in a decrease in the presence and oviposition of the moth Plutella xylostella in the cabbage, because it is repelled by the odors released by the tomato.
– This mechanism also appears to be at work for plant pathogenic nematodes when certain companion species, such as carnation or sesame, are present.
– Aromatic herbs (rosemary, sage, etc.) have been indicated to repel insect pests in orchards, where they are often planted at the edge of plots.
Other pests detect the crop by visual mechanisms that are also affected by the presence of a second crop. This is the case for aphids, which are deceived by the lower intensity of light reflected from the crop with the canopy, compared to the monoculture.

The pest colonizes the polyculture less

In other cases, the pest colonizes the polyculture less and, in addition, the rate of pest emigration to other sites is much higher than when it finds a monoculture plot. This seems to be because the pest has to invest more energy to move and feed on the polyculture and is therefore not as “profitable” as the monoculture.
This mechanism occurs, for example, when the crucifer flea (Phyllotreta cruciferae) arrives on a broccoli polyculture with a vetch cover. The flea has great difficulty, when it lands on a vetch plant, in reaching the top of the vetch plant, in order to jump or fly to another broccoli plant. This is due to the large biomass produced by the vetch and its complex architecture of tangled branches. For this reason, they quickly leave the polyculture plot.

The lower attraction or development of the pest in polyculture is sometimes due to the different “quality” of the host plant, which is therefore less appreciated by the pest. This may be due to the fact that in polyculture there is competition for nutrients between the crops involved, which decreases the extraction made by each crop.

Aphids are an example of this. The fecundity of these aphids is generally proportional to the soluble nitrogen content in the phloem (sap) of the plant. The higher the plant’s nitrogen consumption, the larger the aphid population. Polyculture can reduce the nitrogen uptake of the participating crops, thus avoiding luxury consumption and limiting the development of the aphid population. This is the reason why the aphid level is lower in the bean crop when it is planted under barley or oats.

The pest preferred to locate itself on the companion crop

On other occasions, the reduced presence of the pest on the main crop plants is due to the fact that the pest preferred to locate itself on the companion crop, thus acting as a trap crop.
Some contrasting examples of these trap crops are:
(a) Maize, when planted in strips in cotton fields, attracts the cotton boll weevil away from the crop.
b) In the bean/tomato polyculture, the bean acts as a trap crop against Douglas-fir (Spodoptera sunia) attacks on the tomato, which is practically unaffected.
c) The broccoli crop mixed with another cruciferous host, wild mustard (Brassica kaber), suffered less attacks from the insect pest Phyllotreta cruciferae (fleas). This is because these insects concentrated more on the wild mustard than on the broccoli in the mixture. This preference has a chemical basis, as wild mustard produces more of a chemical that strongly attracts fleas.

When switching from monoculture to polyculture, the presence and effectiveness of pest predators increases. This is due, among other things, to the fact that:
(a) In polycultures, they find other insects to feed on when the pest is not present. In this way, they survive, and when the pest appears, they can control it.
b) They find other sources of food (pollen and nectar) which, as before, allow them to survive.
c) It is easier for them to find shelters for overwintering, reproduction, etc.

Defense mechanisms of the polyculture against diseases 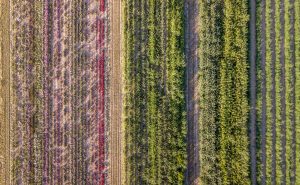 In general, the combination of species susceptible and resistant to a given airborne disease in a polyculture reduces the ability of pathogens to spread. This is due to the increased distance between one host plant and another, the fact that resistant crops act as a barrier, slowing the movement of organisms, etc.
We will discuss in depth the influence of polycultures on the development of diseases transmitted by insect vectors. It is a fact that the incidence of vector-borne diseases (aphids, whiteflies, etc.) tends to be lower in diversified systems. The mechanisms by which this occurs include:

There is less colonization by the disease vector

Polyculture reduces the attraction of insect vectors (aphids, leafhoppers, whiteflies, etc.) to plots or increases migration rates to other plots.

Polyculture consists of host and non-host plants of the pathogen

This mechanism occurs particularly in the case of aphid-borne viruses. In a monoculture, when aphids carrying the virus land on the field, they infect the plants by feeding on them. In this way, each infected plant becomes a source of virus, even for aphids that had arrived “clean” in the field, which begin to transmit them to other healthy plants by feeding on them.
In a polyculture, when it is composed of a virus host crop and a non-host crop, the spread of the virus in the field is much slower. This is because aphids acquire the virus if they feed on an infected plant of the host crop and lose it when they feed on the other crop, in which the virus cannot develop. In other words, transmission of the disease from one plant to another occurs only if both are hosts for the virus and the first to provide food for the aphid is infected.
If the aphid is preferentially attracted to the non-host crop of the virus, this second species can act as a trap crop for both the vector and the pathogen. Tobe defines “crop protection technique” as the inclusion of “non-crop” plants that serve as food for the infective insects, but are not susceptible to the pathogen or desirable for insect reproduction. This method of polyculture or barrier cropping has been successful in reducing the incidence of pathogens in many crops.

This was the case, for example, with the cycadellid transmitting spiroplasmosis to corn in the corn-bean polyculture. In this case, the presence of beans limited movement between rows compared to the monoculture, resulting in less disease spread.

Finally, other mechanisms may lead to reduced development of certain diseases in polycultures. For example, the bacterial disease of tomato Pseudomonas syringae p.v. tomato is spread by wind, rain, irrigation, etc. and is favored by the presence of small lesions on the epidermis of the plants. These lesions are less frequent when the second crop is present and acts as a windbreak, so the importance of the disease is reduced.
However, care must be taken with the seeding density at which the polyculture is established, as high densities can lead to a very humid microclimate, excessive shading, etc., which can favor the development of certain pathologies, especially those caused by fungi.