Organic agriculture is defined as a set of production systems committed to producing food free of synthetic chemical pollutants, with high nutritional and organoleptic value, contributing to the protection of the environment, reducing production costs and allowing farmers to obtain a decent income.

For this reason, organic production systems do not use pesticides to control pests, diseases and weeds, and do not use methods that lead to deterioration of the soil and the environment in general. In animal husbandry, no antibiotics, hormones or other drugs are used in feed or preventive treatments, and husbandry is based on systems that allow for maximum animal welfare. 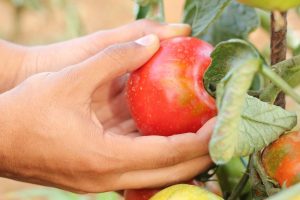 We may think that organic production systems have only recently been developed or that they are traditional farming systems. In reality, they are neither, although it must be recognized that organic farming has been and is nourished by the good practices that have been and are applied by traditional farmers. Indeed, traditional farmers, because of their interaction with the environment and the limited resources to produce without damaging those they already have (soil, water, trees, etc.), use as their main working tool their knowledge of the functioning of nature, obtained through generational transmission and their relationship with the natural environment, which they know and appreciate.
Organic agriculture is not simply the use of traditional farming techniques from the beginning of the last century; while it is based on traditional agronomic practices, its novelty does not lie in these, but rather in the innovations it incorporates.
Modern organic agriculture uses many technological innovations and bases its practices on a thorough knowledge of ecology, soil and plant nutrition, pest and weed management, genetic and biological potential of cultivars and animals, and improved management of crop and livestock techniques. A thorough knowledge of biological and ecological interactions, nutrient cycles, and management systems based on maximizing internal resources is always a prerequisite for a successful transition to an ecological production system.

As we will see below, there are several trends in alternative agriculture that have evolved to the present day and from which organic agriculture has drawn different techniques and contributions.

The British Sir Albert Howard, professor at Wye College, University of London, director of the Institute of Plant Industry Indore in India and agricultural consultant in Central India and Rajputana, can be considered the main author or precursor of this style. His central work, his particular “agricultural testament,” published in 1940, reflects his concern for the degradation of soil resources in the face of the intensification of agricultural production that the industrial revolution meant for the United Kingdom and its colonies. In this book, Howard brings together the results of forty years of research on composting organic waste and its use to restore and maintain soil fertility (Indore method).
The central concern of the authors who developed this type of agriculture has been the degradation of natural resources, primarily soil, that goes hand in hand with industrialized agriculture. They consider soil health as the basis for plant, animal and human health. In addition, they propose concrete management techniques that allow the professional or amateur farmer to enter this production model. This idea has become one of the central pillars of organic agriculture.

Today, organic agriculture has a great capacity for expansion.

Biodynamic agriculture is based on the teachings of Rudolf Steiner, an esoteric philosopher who was born in Kraljevec (Austro-Hungarian Empire) on February 27, 1861 and died in Dornach (Germany) in March 1925. He is the founder of anthroposophy, a spiritual movement that seeks to save humanity from the consequences of materialism and pessimism that took hold of industrial society at the end of the 19th century and the beginning of the 20th. This is no coincidence, for this was a romantic and pessimistic generation, for whom the physical world was hostile, and who felt the need for a religious renaissance. From this perception, Steiner proposes a series of specific agricultural practices to be carried out on the farm, which are in line with his particular vision of the world, so that no action opposes the whole (cosmos), with the main objective of avoiding the degeneration of food, understood as a nutritional loss, and secondly, that of the Earth.
Biodynamic agriculture places great importance on the concept of the “farm-organism” which has the attributes of any living organism: capacity for self-regulation, growth, development and reproduction.

This style of organic agriculture was created and disseminated by the Japanese Masanobu Fukuoka, after the publication of his first book The One-Straw Revolution. An introduction to natural agriculture. Jean Marie Roger also called the proposal he formulated for agricultural production “Natural Agriculture” (Roger, 1985), but it has had much less influence. Fukuoka was born in 1913. Academically, he was trained in microbiology, specifically plant pathology. It was during his work as a farmer that “natural agriculture” was developed.

Fukuoka practices five basic management principles: no plowing, no fertilizers, no pesticides, no weeding (chemical, mechanical or manual) and no pruning, which he calls the “do nothing” method. This management method allows the soil to be undisturbed at all times, which explains in large part his productive success. With his “do-nothing” method, he has been able to grow grain with yields comparable to those of intensive crops. Not only do these methods help maintain natural populations, but Fukuoka believes they are also economically superior to the modern method.

Fukuoka grows two crops a year, rice in the summer and barley and rye in the winter, using only the straw from the previous crop, a cover crop of white clover and a sprinkling of poultry manure as fertilizer. Instead of planting seeds and transplanting seedlings, he sprinkles clay tablets containing seeds into unplowed soil.

To control weeds, all straw from the previous crop is spread unshredded on the fields as mulch. The fields are kept flooded for a short period of time (during the monsoon rains in June) to weaken the clover and weeds, and thus give the rice a chance to germinate through the topsoil.
Fukuoka does not support organic-biological farming, which he sees as another type of “scientific farming” that increases the effort of the farmer to obtain the crop, and his attitude is one of minimal intervention. The idea is that a lot of work can be saved by letting nature do its job, for example by letting roots and small animals graze on the soil, by direct sowing without plowing by spreading the seeds on the surface, etc. However, it is not about abandonment either, but about minimizing the farmer’s intervention to only those activities that may be essential, such as sowing (not always) and harvesting.
Natural agriculture is thus based on respect for and imitation of nature and on minimal human intervention. 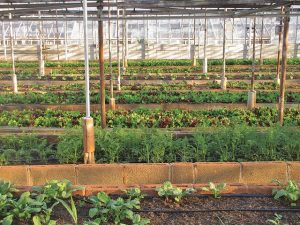 This style of ecological agriculture originated in Australia and was originally formulated by Bill Mollison (1975, University of Hobart, Tasmania), but it is steeped in the philosophy of Fukuoka in Japan. Permaculture was originally born in response to two phenomena in industrialized urban societies. On the one hand, the food dependence of cities on the rural environment and the high consumption of energy from non-renewable sources that currently supplies them, and on the other hand, the migration to the countryside of those who are disenchanted with the urban model of life. This is why permaculture aims to design integrated agricultural production systems both in cities and in marginal areas, usually in the mountains, where these groups settle to live in community. In both cases, these are culturally urban collectives that aim to engage in part-time agriculture, with the goal of self-sufficiency (Mollison and Holmgren, 1978).
Although permaculture principles can be applied to any region, Mollison and Holmgren (1978) argue that it is particularly suited to marginal or degraded areas, such as irrigated plains along rivers, which are the most appropriate places for intensive grain or vegetable farming.

Scientifically, permaculture is based primarily on ecology, landscape engineering and architecture. It is based on the design of integrated systems of high biodiversity, in which animal and plant species with the ability to self-perpetuate play a dominant role; such that, with minimal human management, states of anthropogenic interest are achieved in the evolution of these systems towards climax (Mollison and Holmgren, 1978; Mollison, 1979).

Subsequently, based on the principles elaborated by the above-mentioned individuals, different proposals have been developed, such as organic agriculture (Rodale, 1948), biological agriculture (Aubert, 1970), ecological agriculture (Walters, 1975), eco-scientific agriculture (Hyams, 1976), sustainable agriculture (Fisher, 1978), organic agriculture (Pank, 1980), alternative agriculture (Boeringa, 1980), holistic agriculture (Hill, 1982), etc.
More recently, agro-ecology has developed, which provides so-called “ecological” agriculture with a scientific ecological basis, incorporating in its developments the social component and the dimension of systemic analysis (Miguel Altieri, 1982, Eduardo Sevilla Guzmán, 1990).
The term “agroecology” appeared in the 1970s, probably as a synthesis of the knowledge accumulated during the last century about the functioning of agroecosystems, the consequences of the application of the so-called intensive agriculture, with a high use of chemical inputs and fossil energy, on the environment, human health and society, and the experiences accumulated by farmers who developed agricultural systems in harmony with the environment.

According to Miguel Altieri (1997), in the preface to his book “Agroecology; scientific bases for sustainable agriculture”, “agroecology is a discipline that provides the basic ecological principles for studying, designing, and managing agroecosystems that are productive and conserve natural resources, and that are also culturally sensitive, socially just, and economically viable.” Altieri goes on to say that “agroecology goes beyond a one-dimensional view of agroecosystems, it encompasses an understanding of the ecological and social levels of coevolution, structure and functioning of systems.” Finally, he insists that “ecological health is not the only goal of agroecology,” that “sustainability is not possible without preserving the cultural diversity that nurtures local agricultures,” and that “stable production can only take place in the context of a social organization that protects the integrity of natural resources and ensures the harmonious interaction between humans, the agroecosystem, and the environment.”
The Second World War slowed down the development of organic agriculture in Europe, especially in countries like Germany and Sweden, where it had reached a higher level of development. From the 1960s onwards, the number of organic producers in Europe started to increase again and in 1972 the International Federation of Organic Agriculture Movements (IFOAM) was created to support and spread organic agriculture.

Today, IFOAM is composed of over 700 organizations and has some 60 member countries. Its main objectives include:
▪ The exchange of knowledge and experience among our members, as well as informing the public about organic agriculture.
▪ International representation of the organic farming movement in parliamentary, administrative and political forums (IFOAM has, for example, consultative status with the UN and FAO).
▪ Establishing and updating the “IFOAM Basic Standards for Organic Agriculture and Food Processing” (translated into 19 languages!).
▪ Make international quality assurance of organic products a reality. The International Organic Accreditation Service (IOAS) develops the IFOAM accreditation program, which ensures the equivalence of certification programs in different countries around the world.
In the 1980s, several European countries began to recognize organic agriculture as part of their national agricultural programs, as was the case in France in 1980 when it was included in the Agricultural Orientation Law, and in Denmark in 1987.
In Spain, the approval of the regulation of the generic denomination “organic agriculture” and its Regulatory Council were created by ministerial decree on October 4, 1989 (BOE No. 238/89), and this Council began its activities in 1991 with more than 200 members (Naredo, 1991).
Due to the growth of organic agriculture and the numerous reports that emphasized the need to correct the negative effects of “intensive” agriculture on the environment and the landscape, the European Union took a decision on this subject in 1991 by approving Council Regulation (EEC) 2092/91 of June 24, which regulates organic agricultural production, based on the rules previously developed by IFOAM.
This regulation, in addition to recognizing organic farming as a viable system, compatible with the preservation of the environment and sustainable agriculture, and establishing the rules to be adopted in the production process, established a system of horizontal aids (agri-environmental aids), in which organic farming is considered as one of them.